To enhance your experience, we use cookies. More information x

Arnoud (Arnie) van der Sman is owner/company director as from 1997 .

Before joining the company full time in 1992 , I have been working at a car museum in France and at a restoration company in the USA in the late 80’s and early 90’s .

Nowadays I am visiting approximately 40 shows a year in France, Germany, Switzerland, Italy, England, the Netherlands and Belgium to buy parts.

It all began when my father, Pieter van der Sman  bought his first classic car, a Citroen, in 1974 and another in 1977. Over the years he collected a lot of spare parts.

Pieter took a stall at a classic car meeting in 1978 to sell the parts he did not need. He realized that helping other classic car enthusiasts was a pleasure so he bought more parts for re-selling them at car shows.

In 1981 Pieter  had for the first time a stall at the prestigious car show Retromobile in Paris and I joined him at the age of only 12 years.

Export to the USA started soon.

Pieter retired from the business in 2017 at the age of 84 years old. 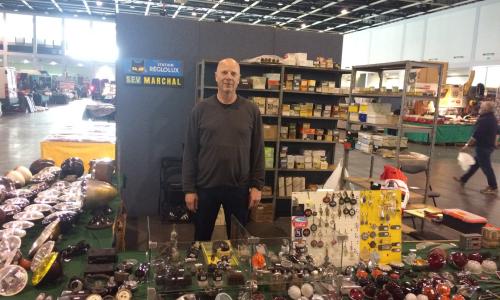